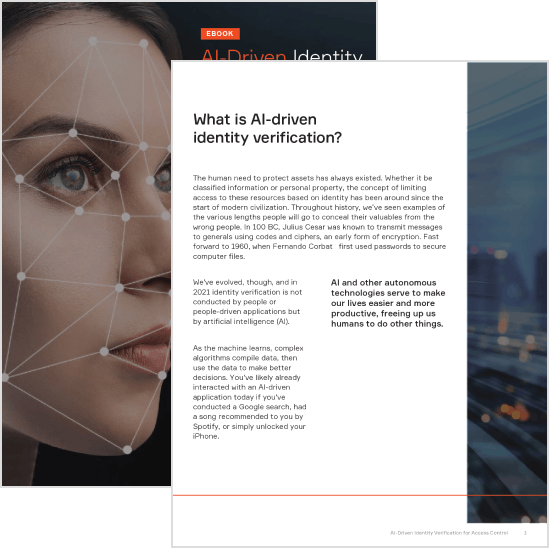 AI and other autonomous technologies serve to make our lives easier and more productive, freeing up us humans to do other things.

What is AI-driven identity verification?

How does AI-driven identity verification relate to physical access control and elevate security?

The human need to protect assets has always existed. Whether it be classified information or personal property, the concept of limiting access to these resources based on identity has been around since the start of modern civilization. Throughout history, we’ve seen examples of the various lengths people will go to conceal their valuables from the wrong people. In 100 BC, Julius Cesar was known to transmit messages to generals using codes and ciphers, an early form of encryption. Fast forward to 1960, when Fernando Corbató first used passwords to secure computer files.

We've evolved, though, and in 2021 identity verification is not conducted by people or people-driven applications but by artificial intelligence (AI).

As the machine learns, complex algorithms compile data, then use the data to make better decisions. You've likely already interacted with an AI-driven application today if you've conducted a Google search, had a song recommended to you by Spotify,